Alex is 16, a misfit, a drop-out, a failure. She uses drugs; she cuts herself. She has been sent by her despairing adoptive mother to a farm in northern Germany. At first, Alex hates this remote place and the demanding job of looking after the horses. But under the tutelage of Nina, a 30-something taking a break from city life and her partner, Christine, Alex gradually comes to form a bond with the animals in her charge.

Then Kathy arrives at the farm to take a holiday, bringing her own, beautiful horse with her. Alex takes an instant dislike to this privileged newcomer. Slowly, though, the barriers between the two are broken down and Kathy finds herself smitten by the streetwise and energetic Alex. The pair starts horsing around, larking about on the mudflats, until one weekend, when they’re alone at the farm, things spiral out of control. A coming-of-age story with girls and horses, under the lowering skies of northernmost Germany, by the ocean and close to the Danish border.

Reviews and other voices

Of Girls and Horses is a departure from the earlier work that put Treut on the queer map. This film turns toward youth, toward innocence,  beauty and power as they exist  in nature. (…) Treut is asking the viewer to sit, rest and take in the energy around them – it is the same task demanded of Alex. This injunction is subtle and startling, just like the vital energy of girls,  and of horses. Afterellen

“Young girls and their love of horses are a social phenomenon. There’s very many films, books and TV series but little is relevant and counting. In this context there is one exception, a real stroke of luck: OF GIRL AND HORSES by German filmmaker Monika Treut. Treut is known as a radical feminist and underground artist, but even more surprising is this almost classical, realistic and subtle story of two friends who work for one summer on a horse farm, a coming-of-age story, free from exploitation and stereotypes.” Viennale 2014

Writer-director Monika Treut (“Gendernauts,” “Ghosted”) takes to the countryside of rural Germany for her new feature, “Of Girls and Horses,” an understated and thoughtfully produced film that quietly builds up characters and story. (…) With the Hansens away and Christine asking her to come home to Hamburg for the weekend, Nina entrusts the farm to the girls for a weekend. In an American movie, this would have led to a huge party, contests among a large group of randy young friends to lose their virginity, and, quite possibly, a hospital visit and / or four-alarm fire. None of that is necessary here: Treut scales events to a realistic level and slows them to the pace of life. There’s a bottle of booze and a minor mishap, but panic and tragedy aren’t necessary. Rather, once things are sorted out, there’s a liberating moment that suggests the mishaps and mistakes of growing up really do lead someplace worthwhile, a place where from time to time there are such things as freedom and happiness for those who know who they are and embrace it. Cinematographer Birgit Möller underscores the point with some fluent camerawork that’s not flashy, but instead achieves a sense of calm expansiveness. Edge Boston

“I wanted to live in your movie! For once, teenage girls who aren’t vapidly chatty, catty or unaffected. Just a lovely relationship to gorgeous nature, horses and friends. And the beasts are so present and aware! No unnecessary dialog or drama, zero predictable stereotyping, but just pure flowing pleasure and appreciation, coming right from you to us. Thank you!” comment after Frameline’s San Francisco screening

“We all loved the film. Apart from the fabulous beasts themselves, the open horizontal landscapes that looked like dutch still-lifes, and the natural acting, I also liked the story-line that deviated from the usual formulaic, tension-struggle to crisis to resolution. everything just happened and we got to enjoy looking and flowing with it. A true homage to nature, very poetic!” another comment after the S.F screening

“You and your DP did spectacular work photographing the horses. I don’t think I’ve ever seen horses look so beautiful on film before. The young actress who played the troubled girl was terrific – even when the character was being obnoxious, we cared what happened to her because the actress totally commanded her scenes.”  comment after the L.A. Outfest screening 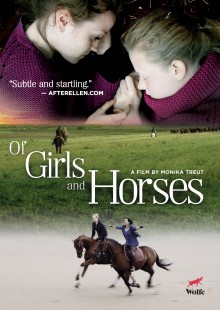