GENDERNAUTS explores phenomena of gender fluidity at the end of the millennium in the Bay Area, California. It is a film about cyborgs, people who alter their bodies and minds with new technologies and chemistry, with an emphasis on biological women who use the male sexual hormone testosterone. We get to know San Francisco’s leading gender mixers: Max Wolf Valerio, who reads from his book, Max, A Man; Jordy Jones and his net art; Texas Tomboy and his video art; Stafford, who explores new business venues and, together with Jordy Jones, organizes Club Confidential, the world’s leading gender bender event. We meet Hida, an intersexed woman, who happily inhabits the middle ground between male and female; and two extraordinary biological women who support transgender people: sex goddess Annie Sprinkle and ex-centerfold model Tornado, who was Stafford’s lover and is the self-proclaimed mother of Texas Tomboy. We take excursions into the life of the spotted hyena, a very special animal society. The female hyena has an enlarged clitoris that looks like a penis. Her bloodstream carries a large amount of testosterone especially when she’s pregnant. Our tour guide for the journey through shifting gender identities is Sandy Stone, also known as the Goddess of Cyberspace, who is Director of the ACTLab at the University of Texas at Austin.

For more than 15 years, sexual provocateur and fest fixture Monika Treut has been cheerfully championing a laissez-faire approach to pleasures of the flesh in her docus and features (The Virgin Machine, Didn’t Do It For Love), rattling the cages of moralists and militants alike by eschewing politically correct strategies in favor of a more benevolent approach to gender expression…. informative and non-threatening pic will play well to just about anyone brave enough to buy a ticket. Eddie Cockrell, Variety

Compelling! …. a look at identity that’s as multilayered as it is readily accessible. Manohla Dargis, L.A. Weekly

Gendernauts is a beautiful film about an avant-garde, a precise, tender film, particularly about people in San Francisco, about nuances and the poetry of the twilight zone. (…) Cinema has always been fascinated by the transsexual, from Asta Nielsen to Neil Jordan’s ‘Crying Game’. Monika Treut transforms the often melancholy aspect of this film tradition into an affirmation of life. ‘Gendernauts’ is no apocalyptic film, rather a film of searching and hope. Without a doubt, at present Monika Treut along with her portrait films belongs to the best German filmmakers. Hans Schifferle, Süddeutsche Zeitung

... a fascinating and candid portrait of a family of friends. Mel Steele, The Guardian, London

This latest effort from underground German icon Monika Treut is the kind of movie that one finds most impressive when it’s over. A documentary about people who find themselves straddling both the male and the female hemispheres of experience, ‘Gendernauts’ does exactly what the title suggests – shows us people exploring that final frontier. And it’s not space – it’s gender. Through a series of interviews with sex-change candidates, hermaphrodites and fully transformed male-to-female and female-to-male human beings, Treut actually manages to deconstruct the whole ‘gender assumption’ one brick at a time. I noticed that at first I tried to isolate the ‘natural’ gender of each talking head. A person with female features and facial hair was so frustrating that I found myself thinking words like ‘freak’ and ‘electrolysis.’ Fortunately, my pea brain opened up as the movie unfolded and showed me just how caged we are by expected ideas of gender. Katherine Monk, The Vancouver Sun 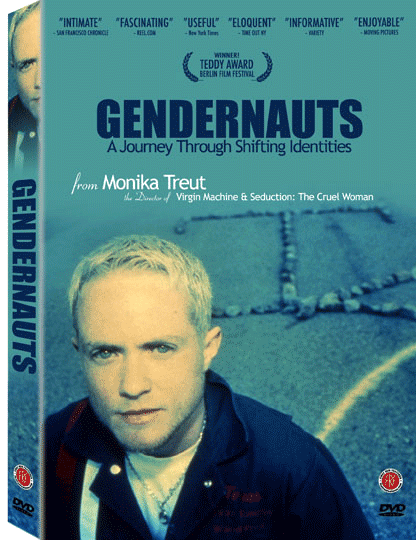